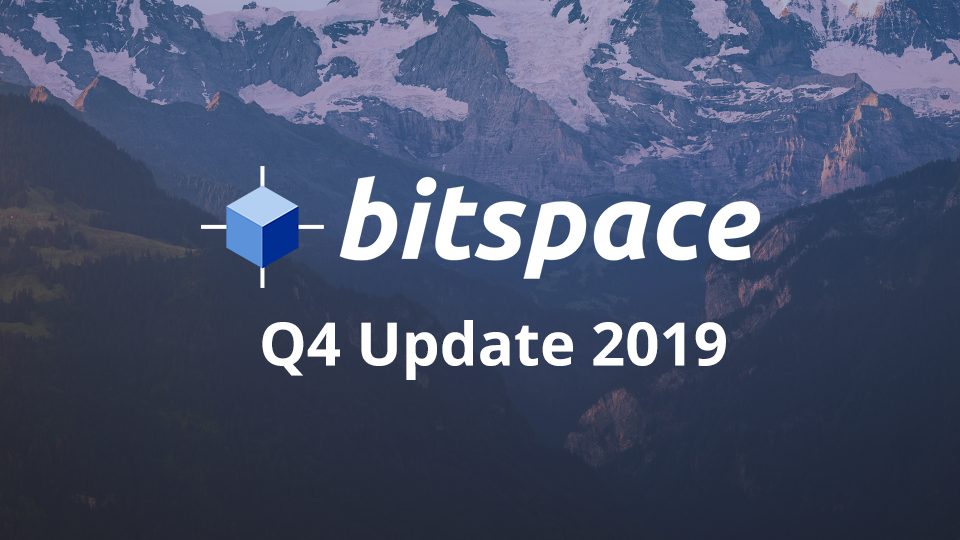 As we are nearing the end of the last quarter of 2019, BitSpace is continuing the focus on internal company development and strengthening of our network. We are expanding the advisory board, hosting network events and developing our portfolio of companies.

We are looking forward to the 2020s as the decade when blockchain applications become more practical and mainstream. While we saw an explosive rise of Bitcoin price the past decade, the value of Bitcoin and other cryptocurrencies (200 billion USD) is still low relative to the global economy. In comparison, the total market cap of Gold is 7 trillion USD.

This quarter has also seen an increased focus towards Artificial Intelligence and the Internet of Things. In the coming decade, blockchain and distributed ledger technologies will increasingly combine with other emerging technologies like IoT and AI. Together, these three industries are projected to add a combined 30 trillion to the global economy by 2030.

We are excited to explore these areas further and gain a better understanding of the Norwegian landscape, how Norway can increase its activities in the emerging technologies sector and strengthen its contributions to the global scene.

Please see below for a progress report covering the fourth quarter of 2019.

BitSpace Investment Strategist Raymond Øverlie has joined Graphchain, taking the role as Chairman. Raymond has 20+ years of experience in the financial markets and as an investor he has been a founding partner of several startups, with experience in important leadership roles such as Chairman, CEO and CFO.

Ben Goertzel is the founder and CEO of SingularityNET, a blockchain-based AI marketplace. Ben is also the chief scientist of financial prediction firm Aidyia Holdings and Chairman of the Artificial General Intelligence Society and the OpenCog Foundation. He was the Chief Scientist of Hanson Robotics, the company that created the humanoid robot Sophia, until early 2019.

Together with DLA Piper, BitGate is in dialogue with the Financial Authorities (Finanstilsynet) to obtain a license for both digital currency custody and exchange. Meanwhile, the Tech and Compliance teams are working closely together on development of back-end compliance tools.

The BitGate App Beta Launch campaign currently has nearly 700 signups ready for onboarding to the platform (//kampanje.bitgate.no), and there are several interesting developments to look forward to in Q1 2020. If you want to know more about how to get involved, make sure to get in touch.

Launch of the Global Blockchain Organisation

BitSpace attended the launch of the Global Blockchain Organisation in Oslo at the Hotel Continental in December. The GBO is an initiative by the Alternative Development Organisation and guests included policy makers and business leaders from India, Japan, Africa, US and Norway.

BitSpace hosted the Artificial intelligence & Blockchain track at the AIM North Symposium conference at the Oslo Metropolitan University on the 7th November. Christian Lains discussed the developments in the IoT, AI and Blockchain space together with IOTA, Bitrezus, Bibox Europe and Distributed Innovation.

BitSpace attended the Malta AI & Blockchain Summit. The event had more than 6500 attendees from emerging tech industries. Known as “Blockchain Island” the country has had a progressive approach to Blockchain technology and encourages a mix of delegates, startups and investors from around the world.

In November, BitSpace co-hosted the Blockchain Evening together with Business Angels Norway at Oslo International Hub. The lineup featured popular names like Magnus Jones, Lasse Meholm and Stephan Nilsson, and interesting projects such as IOTA, BitGate, Wakandi and Empower.

International operations are continuing to strengthen, as BitSpace Poland just hosted its 12th Bitcoin Meetup this year. Throughout 2019, BitSpace Poland has invited industry professionals, both local and international, to give talks on a wide range of Bitcoin related topics. The meetup consistently stimulates constructive discussions and has become an important forum for Bitcoiners in the city of Kraków, Poland.